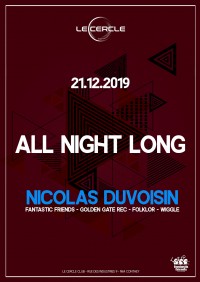 BIO NICOLAS DUVOISIN:
Creative attitude makes each set he play an adventure. He is playing since the age of sixteen, he played at all major events
and venue in Switzerland and Europe and starts know getting international attention. His sets travel between minimal house and techno, always with efficiency and class to the dancefloor, as he moves himself while playing with needles and records, he gives to each set a ferocious elegance and efficacy, Nicolas gets the right groove and the right skills.
Also organizer of the major events in Europe called Fantastic Friends Party! His events created a cut, with the residency at La Ruche and now at the Folklor (Lausanne), Nicolas Duvoisin is also a producer, with his unique style mix percussion, massive bass and right groove between house and techno. During the last two year’s he appears on several like Fantastic Friends, Highgrade, Bar 25, Kindisch, Wiggle and more. His releases receive a massive support from the greatest DJ’s and producers at this moment like Magda, Richie Hawtin, Laurent Garnier, Luciano, Anja Schneider, Reboot and more.
During 2009 Nicolas Duvoisin created his own label called Fantastic Friends Recordings, with tracks and remixes from artists as Mihai Popoviciu, Julien Chaptal, Agaric, Lauhaus, Daze Maxime, Yapacc, Tim Xavier, Someone Else, Ilario Liburrni, Markus Homm, Loquace, Dachshund and many more